Wanda’s father, Mieczysław, was the only son of Władysław Medard Salmonowicz (1822-1865)  and Konstancja Benisławska (1841-1892). He was born on December 1st 1863, on the Raczuny Bujwidowskie (or just Raczuny), a manor his mother had bought in 1859, on what used to be the  Polish-Lithuanian Commonwealth . After his mother’s death (heart attack) in 1892, he inherited the estate, which he sold to emigrate with his wife to the state of Paraná, Brazil in 1900.

He made a series of unsuccessful attempts to get a business going in Curitiba but the glass factory he had built in Antonina was burnt to the ground and he got swindled by his Brazilian partners in other ventures. Finally , he went bankrupt and committed suicide in 1913, leaving his wife and four children to fare for themselves. They got support from the Congregation of the Sisters of Saint Joseph of Chambery  (Congregação das Irmãs de São José de Chambéry), especially after Antonina and Iwon died a month apart in 1923, most probably of Spanish influenza.

In 1919 Wanda graduated from Collegio São José in Curitiba, Paraná and taught at a primary school in Castro, Paraná until 1920. From 1920 to 1921 she followed evening courses in shorthand and typing, which allowed her to become a secretary at the General Polish Consulate in Curitiba from 1920 to 1922. From 1922 to 1924 she worked for the Colletoria Estadual, the State Tax Office in Curitiba.

At the end of 1923, she met and fell in love at first sight with Bohdan Pawłowicz at a party organized by the Polish Consulate for the Lwów crew. They got married  on 19th January 1924 at the Santa Cândida church in Bacacheri, a Polish colony near Curitiba. In April she sailed to Poland to rejoin her husband in Warsaw.

From 1924 to 1925 she studied Commercial Art at the Warsaw Academy of Fine Arts but stopped in June when her son Leszek Kazimierz was born and the family moved to the house on Gorazsewska 8, in the Czerniaków Garden City.  On a very cold 26th November in 1928 she gave birth to a daughter, Hanna Antonina (at the hospital, as her first childbirth had been at home and almost cost her life). When her daughter was about a year and a half old, Wanda decided to travel to Brazil to see her sisters and she left her children under the care of a nanny and her mother-in-law. What was to be a short trip abroad lasted more than a year –  the Brazilian 1930 revolution started on October 3rd. Wanda was not allowed to leave the country and had to wait until the upheaval was over to go back. When she arrived, her daughter did not recognize her and asked who that nice lady was. 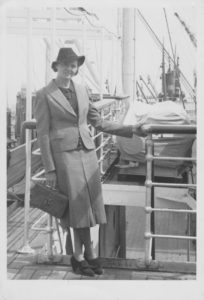 The family spent their summer holidays either in the mountains or at Jastrzębia Góra, on the Baltic coast, where her father-in- law, Kazimierz , had built a house.

At the end of July 1939, during a summer holiday in the mountains with the children, she accompanied her husband to Gdánsk, where he boarded the M/S Chrobry, the first Polish transatlantic liner on her maiden voyage to South America.  This was the last time she saw her husband before reuniting with him 4 years later –  in Brazil.

By  mid-August she received a telephone call from the mayor of Tórun, Władysław_Raczkiewicz, who was later to become the first Polish president in exile, advising her to return home, pack and leave town with the children as the situation was uncertain and the risk of war was high. Her husband’s status and activities would surely make them prime targets for arrest, deportation or murder. (Intelligenzaktion).

Wanda returned to Tórun with the children, packed some of their belongings, closed the apartment and left it under the care of the servants, saying they would be back later (they never returned). She tried to join her mother-in-law (Helena) in Czerniaków, Warsaw. However, the trains were packed with soldiers.  She managed finally to get a boat on the Vistula River and  made it. The day after they arrived, the war was declared.

In the next weeks that followed, she made arrangements with Krystyna, her sister-in-law, who was married to Aleksander Hauke-Nowak,  the administrator of the Volhynia province.  They sent a car to fetch the family and bring them to their place in Łuck in the eastern part of Poland, as it had not been occupied yet by the German forces (Molotov-Ribbentrop Pact).

The road they traveled was being heavily bombed and shelled so they often had to stop and take refuge, which slowed down their arrival. The children remember the raids, the blasts, the houses shaking.  Later they would learn the strafe was caused by the fact that the same road was being used as the escape route for the Polish government in exile.

When they finally arrived in Łuck, the Hauke-Nowaks were preparing to leave. Aleksander joined the Polish government in exile in Romania (and later Paris) while Krystyna made her way out of Poland to England through the Baltic states. Before leaving, they directed Wanda to a farm nearby but a few days later, the farm was inspected by Russian army officers. The farm owners fled soon after, leaving behind a horse and a cart for Wanda and the children. Wanda planned to drive the cart back to Warsaw but was stopped by the Soviet army on the road and the family was taken to a detention camp. Thanks to her courage and to the Brazilian passport she brandished (Brazil had not declared war yet),  Wanda managed topersuade the camp supervisor that she and her children were Brazilian and should not be there. She sounded so firm and convincing that he let them go. Many prisoners escaped when the gates were opened to let them pass.

As the horse was exhausted,  Wanda made the children take turns on the cart and walked back to the empty Nowak’s house in Łuck, which had been occupied by Aleksander’s major d’homme. There the family rested for about two weeks while Wanda recovered from the high temperature provoked by the blisters that covered her feet.

Wanda then decided to take the children back to Warsaw to her mother-in-law’s house in Czerniakow.  In Przemyśl , she paid a Jewish couple to shelter them and cross the Russian-German demarcation line (San river) on a little boat in the dark of night. They then boarded a train full of Polish soldiers travelling to join the Polish army units in the west and civilians withdrawing from the Soviet occupation. They arrived onto a scenery of destruction – Warsaw had surrendered and was occupied by the Germans. She hired a cart at the station and drove to Czerniaków, not knowing whether the house would be there.  On arrival, the family was relieved to see just one of the front trees had been knocked down by the bullets and  Helena J. Pawlowiczowna was there to give them shelter again.

Hanna, who was 11 then,  was sent to a primary school nearby, but the teaching of Polish language and history had already been prohibited. Leszek, who was 14, was about to enter high school but as most Polish Educational Institutions had been closed due to policies aimed at cultural genocide, he had to resort to underground education and the Secret Teaching Organization network to continue his studies.

Wanda saw the situation worsen and feared what might happen to her children, especially Leszek, who could be caught and sent to German labour camps.  Being a Brazilian by birth, she made several contacts and went to the Brazilian Consulate in Berlin, who issued her passport and instructed her how to get the papers which would allow her to go out of the country.